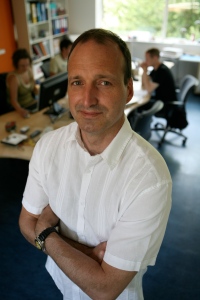 The roots of what is now Cardiff Met’s User Centred Design (UCD) research group lies in Cardiff School of Art and Design’s (CSAD) Programme for Advanced Interactive Prototype Research (PAIPR). PAIPR was established by Steve Gill and Gareth Loudon in 2001 to investigate methods for the rapid design and development of computer embedded products such as mobile phones and medical devices. Meanwhile, the National Centre for Product Design & Development Research (PDR), also based at Cardiff Met, had been examining the effective implementation of UCD processes within commercial practice. This work by Jarred Evans and Andy Walters led to the establishment of PDR’s UCD laboratory funded by the Welsh Government though an Academic Expertise for Business grant.

The UCD research group brings together these two strands in a cross-unit collaboration between CSAD and PDR. While the computer embedded device remains a major focus, in recent years we have developed further interests connected to the importance of the prototype as a focus around which ethnographical research methods can be deployed in design praxis. The group places a great deal of emphasis on the applied and works on the development of UCD tools and process. We have worked closely with blue chip companies such as Sony-Ericsson and Kenwood, and many of the techniques developed through the group’s research are deployed directly in commercial design projects through PDR’s commercial UCD offering.